The Newest Abutilon Hybrids (as well as the Old Favorites)

Hey, abutilon lovers everywhere! Great news: fruitful year 2015 turned out to be full of surprises. This season I experimented with cross-pollination of abutilon megapotamicum hybridum 'Fairy Coral Red' (or, as a matter of fact, it can be a similar dwarf hybrid with small bright-orange flowers). I pollinated it with many of my own hybrids, but I never expected the outcome I got.

Well, for one thing, most of the seedlings were unexpectedly tall and lanky, unlike the parent plants. Don't know why. With my limited knowledge of genetics, I can only guess that 'Fairy Coral Red' was originally produced from a much taller plant, which now shows in the new generation.

Anyway, a number of seedling did have a shorter stature and a bushy growth habit. The top favorite is now called 'Arlequin' for its multicolored leotard and a funny shape of the petals. It's a dwarf plant with smaller leaves, well-developed side branches, and many buds which have a tendency to bloom at the same time, despite the overcast autumn skies and general lack of sunlight.


I plan to take grafts from it in spring and make (finally!) some profit. The second best abutilon hybrid 2015 has received my own pet name -- 'Alicia' -- and for a reason.
Well, in the picture it doesn't look that great because the picture is poor. I'm waiting until it's in full bloom and on a sunny day, I hope, to take better pictures. So you'll have to trust me: the plant is awesome. Why? It's about 5 inches tall with SO many buds that I literally went crazy about it. There are up to 3 buds tied together -- a feature unseen and unheard of in Bella hybrids, at least. 'Alicia' is also derived from 'Fairy Coral Red', which blooms sparingly, by the way. Unfortunately, you cannot see it in these pictures, but I'll do better next time, I promise!
The copper medal goes to a bright red hybrid (no name yet; possibly 'Lara') whose petals turn slightly up -- clearly the feature of 'Fairy Coral Red'. However, the size of the flowers is much bigger, and, unfortunately, so is the plant itself. It will also need pinching or pruning to let the side sprouts grow. But it is lovely anyway!

I am still awaiting more hybrids to bloom, although I have given away some of them, like I said, for being way too lanky. People felt elated anyway. Everyone loves free stuff.

I also wanted to brag about nicely taken pictures of old favorites: a couple of red Bella hybrids... 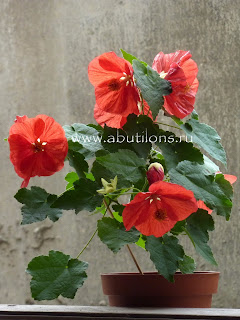 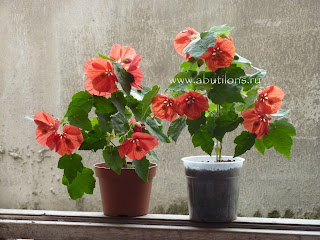 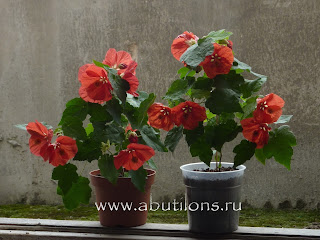 ... and my 2013 abutilon hybrid 'Ameli'. This "baby" was raised from my seedlings by another abutilon grower and hybridizer, but I love it nonetheless!